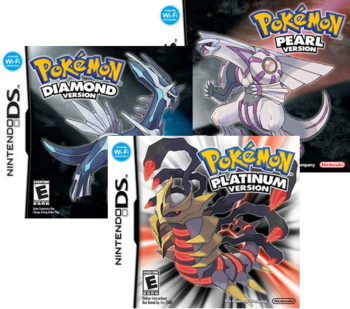 In the fabric of time and space...comes a new adventure.
"Welcome to the next generation of Pokémon! As a rookie Pokémon Trainer, you will need to catch, train and battle Pokémon on your journey to become the Pokémon League Champion. You will face many challenges along the way, as you search for the Pokémon that rules time or space..."
— Blurb on the back of the boxes of Pokémon Diamond and Pearl Versions
Advertisement:

A third version, titled Platinum, came out a couple years down the line. Platinum tweaked the storyline a bit, adding more characters, remodeling the graphics of a few locations, revamping some gyms, and naturally including new challenges for players.

As part of the franchise's 25th anniversary, a pair of remakes for the Nintendo Switch, Pokémon Brilliant Diamond and Pokémon Shining Pearl, have been announced to be released worldwide on November 19, 2021. Notably these remakes are being developed externally by ILCA Inc., as Game Freak is primarily working on Pokémon Legends: Arceus, which is a Wide-Open Sandbox take on the series also set in the Sinnoh region, but in the distant past.

Before Gen 5, watching Blissey's health bar go down was an absolute NIGHTMARE.

Before Gen 5, watching Blissey's health bar go down was an absolute NIGHTMARE.