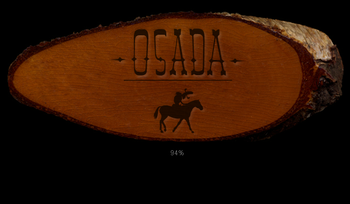 The loading screen, and the only time the titular word appears.
Osada is a web game (for a definition of the word "game" anyway, it's mostly just visuals and video, there's not much of an interactive element beyond clicking) that takes place in a surreal, Dada-esque version of the US-Mexico border. Notable features include stunningly bizarre visuals, and an excellent soundtrack. It is produced by a team of Czechs. It can be found here

Tropes that apply to Osada: