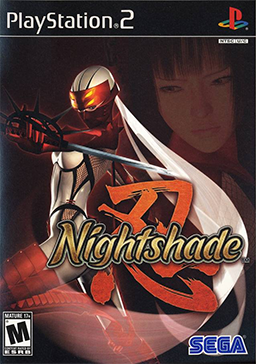 Nightshade, also known as Kunoichi in Japan, is a 2003 game for the PlayStation 2. It's a sequel to the previous year's Shinobi, a 3D installment in Sega's ninja franchise, and plays in a similar way.
Advertisement:

Hibana is a government-employed ninja, out to assassinate the members of the Nakatomi Corporation. In a near-future Tokyo, Nakatomi has unleashed a series of demons upon the city, and Hibana must eliminate both them and Nakatomi's rival ninja.

Nightshade is notoriously difficult, mostly due to its later levels requiring increasingly high levels of precision and timing.

Not to be confused with 1991 NES game called Nightshade.

12 years later, Hibana reappeared as a solo unit in Project X Zone 2 and would reappear again in 2018’s Sega Heroes