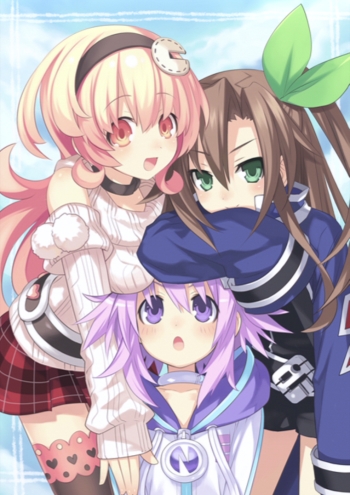 Neptune and her friends, Compa (left) and IF (right)
Advertisement:

Neptunia (Neptune in Japan) is a series of JRPGs about the Console Wars that were developed by Compile Heart, and published by Sega in Japan for the first game, Idea Factory for all later titles in Japan, NIS America worldwide until Producing Perfection (including the mobile app), and Idea Factory International as of Re;Birth1 worldwide.

Yes, you read that correctly. The Console Wars AS A VIDEO GAME SERIES! No, we have no idea what brought Sega, Compile Heart and Idea Factory to do this.

The series started with Hyperdimension Neptunia, a game notorious for its gameplay, which is generally seen as bad (and can be blamed on having No Budget), with the highlight being the story between the gameplay, which mainly contained meta-level video game jokes and interactions between its small cast of Moe Anthropomorphisms of game consoles. Despite this, it nevertheless managed to get a quite big and devoted fandom. In fact, it became Compile Heart's top-selling title, and sold so well to Western audiences (for a niche title) that NISAmerica was not hesitant in the slightest to bring the second installment overseas.

The continuity was rebooted in its second installment (thus the title Hyperdimension Neptunia mk2), both in order to not force people to play the first game to understand the story, and because the first game's true ending left no room for a continuation without a complete cast change. The story in that installment focused more on piracy throughout the game, whereas it wasn't as big a force in the first game's plot until near the end. This, as well as further games in the series, use the same premise, but improved greatly upon things that caused complaints in the first game. In fact, the first game was later remade to correct these complaints further.

The series and all of its spin-offs and supporting media tends to not follow a specific continuity, but the general setting is the same. In a world on another plane of existence from humanity, there is Gamindustri (or whatever name other continuities give their variant). Here, there are four nations inhabited by characters based on several game series, companies and characters. These countries are based on various game console companies, each led by an immortal goddess (or CPU), who may have younger siblings (CPU candidates) who are also immortal. They compete for supremacy, but the leaders eventually become friends (many works within the series even start them off as friends). Conflicts within the series mostly come from third... err, fifth, parties, while the competition between nations is quickly relegated to Friendly Rivalry status.

Despite starting in the second half of 2010, due to its popularity and being Compile Heart's flagship series, the series already has a great many games and spin-offs in other mediums.

There are also several Drama CDs based on the series.

See Hi-sCoool! SeHa Girls, except that it involves Sega consoles. Also see World War Blue for a similar take on the Console Wars.

Tropes common between all games: