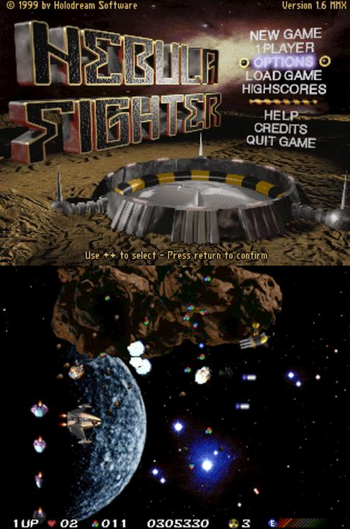 "At some point during the late 20th century, the world is taken over by a power-hungry terrorist organization. Soon after, Earth is contacted by an alien race called the Venishians, who unwittingly become the target of the greedy new government. By capturing and analyzing one of the alien ships, scientists are able to construct a fleet of fighters capable of attacking the celestial visitors on their home planet. The player is responsible for breaking through the alien defenses and alerting earth to commence the attack, yada, yada, yada.... Does anyone really pay attention to the story while blasting aliens into space debris?"
— Part of the game's plot
Advertisement:

Nebula Fighter is a Horizontal Scrolling Shooter written by Holodream Software and was first published for DOS PCs in 1997, with a Microsoft Windows version following in 1999.

In the late 20th century, the terrorists of the world began to grow in power. They eventually merged to form a massive empire and overthrew all the governments of the world, setting the stage for a new world order. In the process of world domination, the newly-formed empire realised that they could effectively rule the world through terror itself.

A few decades later, in the year 2010, a space-faring race called the Venishians arrived on Earth. They brought with them some of their technology, including a number of highly sophisticated spaceships. With their visit, the empire realised that there were other civilisations in space that could be subdued and dominated like the various world governments in the past.

...Or you can ignore the plot completely and just plow through 21 levels of Stuff Blowing Up, which was what the game was remembered for.

Once touted by the Adrenaline Vault as having the potential to re-define the Shoot 'em Up genre, Nebula Fighter left a lasting impression on most players back at the turn of the millennium for multiple reasons. Apart from inverting the typical Shoot 'em Up plot by putting the player in the role of the antagonist, the game was considered one of the more aesthetically appealing ones of its time. Nebula Fighter also had a rather unique take on Boss Fights: each level ended with one, and most of the bosses drop their signature weapon when defeated, which could be picked up by the player for use. During levels, the player could also pick up secondary weapons such as side missiles and a rear-firing drone.