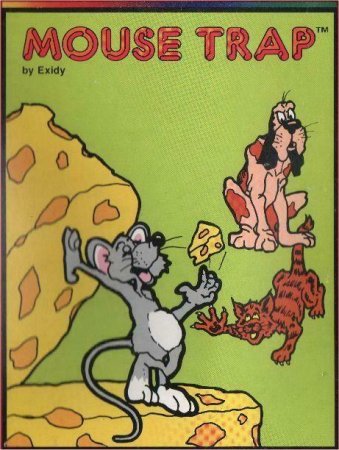 Mouse Trap is a 1981 arcade video game by Exidy that was ported over to the Atari 2600, the ColecoVision, and the Intellivision.
Advertisement:

In the game, you're a mouse who goes through a maze collecting cheese and avoiding run-ins with cats. By collecting bones, you can turn into a dog and chase after the cats to catch them for bonus points. What you want to avoid more than the cats is the hawk, who flies around over the maze to catch the mouse. To confuse the cats, you can change the doors of the maze with three color-coded buttons, and to escape and confuse the hawk, you enter the IN gate in the center of the maze which teleports you to one of the four corners at random.

It was one of several games that was made into a song that appeared on Buckner & Garcia's Pac-Man Fever album.