Spoilers Off for Mortal Kombat. You Have Been Warned. 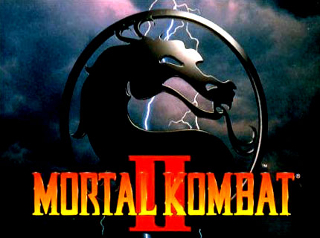 Feel the wrath of Shao Kahn!
"500 years ago, Shang Tsung was banished to the Earthrealm. With the aid of Goro, he was to unbalance the furies and doom the planet to a chaotic existence.
By seizing control of the Shaolin tournament, he tried to tip the scales of order towards chaos. Only seven warriors survived the battles, and Shang Tsung's schemes would come to a violent end at the hands of Liu Kang.
Facing execution for his failure and the apparent death of Goro, Tsung convinces Shao Kahn to grant him a second chance.
Shang Tsung's new plan is to lure his enemies to compete in the Outworld, where they will meet certain death by Shao Kahn himself.
Now the kombat kontinues..."
— MKII's Attract Mode summarizes the events thus far
Advertisement:

The original Mortal Kombat was a huge hit, which made the creation of a sequel inevitable. In 1993, that sequel — Mortal Kombat II — was unleashed in arcades. It would eventually be ported to the Sega Genesis, Super Nintendo Entertainment System, Game Boy, Sega Saturn, Sega 32X, Sega Game Gear, PlayStation, PC and Amiga.

With Shang Tsung's plan to conquer Earthrealm through the titular tournament foiled, Shao Kahn — Emperor of Outworld and the man behind the plan — prepares to end the sorcerer's life. Shang Tsung comes up with an idea to save his skin: because an invitation to Mortal Kombat cannot be refused, if the Earthrealm warriors were challenged to a tournament in Outworld, they would have to accept...at which point Kahn's Outworld warriors, led by Shokan warrior Kintaro, who seeks revenge for the death of Prince Goro, could kill the warriors and begin the invasion of Earthrealm. Shao Kahn approves of Shang Tsung's idea, restores the sorcerer's youth as a token of appreciation, and sends out the challenge. Earthrealm's warriors accept Shao Kahn's invitation, and after they arrive in Outworld, they come face-to-face with numerous new foes, all of whom are ready to crush a few skulls.

MKII ramped up the blood'n'guts by giving each character an extra Fatality to their characters and adding new stage-specific Fatalities. It also added two new Finishing Moves — the Babality, which turns the opponent into a baby, and the Friendship, a Non-Lethal K.O. where the characters do friendly or funny things to their defeated opponents, — as potshots at Moral Guardians who hated the first game's violent content.

This game was followed by Mortal Kombat 3.