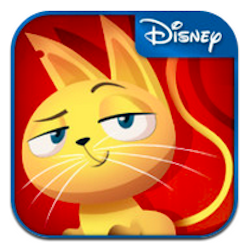 A physics-based puzzle game for iOs published by Disney Interactive, who also released the very popular Where's My Water?
Advertisement:

Mittens, a ginger cat with a sly grin almost permanently glued to his face, has another day of sifting through the city's garbage cans interrupted by the sight of a lavender Persian elegant enough to be a Disney Princess. Love is not so easy, however, for such a regal lady naturally expects gifts from her prospective suitor. Thus, our besotted protagonist sets off across the rooftops in pursuit of bottles of milk, circus balloons, and other trinkets with which to woo his beloved.

You do not control Mittens directly, instead you manipulate various objects in each level to maneuver him to the gift item and nullify threats along the way. You might cut the support he's standing on to send him plummeting to a power line he can bounce on like a trampoline, up into the grip of a friendly bird which carries him to a higher rooftop (while you're busy slamming an awning in the face of a man trying to swat him with a frying pan,) where a television antenna can be used as a catapult... and so on.

In summary, this is Toon Physics: The Game.

Despite the name, the game has no relation to the cat from the Disney film Bolt.