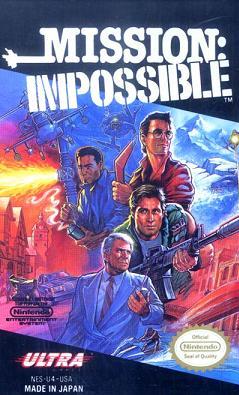 Mission Impossible is a 1990 video game developed by Konami and published under the Ultra Games label (Palcom Games for the PAL region) for the Nintendo Entertainment System. It was based on the revival of the 1988-90 Mission Impossible television series. You play as Grant Collier, Nicholas Black and Max Harte, who all have unique abilities and weapons. Your mission, should you choose to accept it, is to save a scientist and Shannon Reed from the Sinister 7.

Tropes pertaining to the 1990 game: