Spoilers for all Metroid entries preceding this one, including Metroid Prime and Metroid Prime 2: Echoes, will be left unmarked. You Have Been Warned! 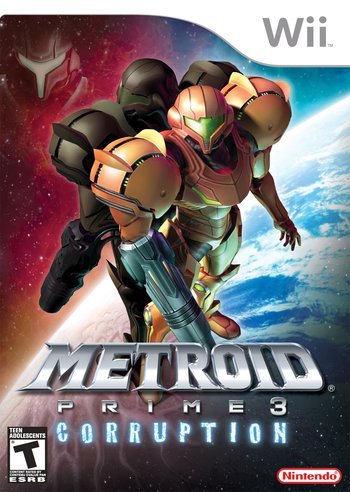 You Are The Bounty Hunter.
"The Trilogy comes to a close as Corruption creeps over the universe... and into Samus Aran."
— Boxart tagline
Advertisement:

Metroid Prime 3: Corruption is a First-Person Shooter released in 2007 for the Nintendo Wii. It is the third home console installment in the Metroid Prime Trilogy, and the fifth game in the overall Metroid franchise's fictional chronology.

Set six months after the incident on the planet Aether, Samus Aran and three other elite hunters are summoned to the Galactic Federation anchorage above the military world of Norion and tasked by Fleet Admiral Castor Dane to investigate a mysterious computer virus that seems to have infected the Federation's network of Aurora Unit supercomputers. Not long into the initial meeting, however, a Space Pirate fleet warps into the system and attacks the military base below using a new line of Phazon-powered bio-weaponry. It is soon discovered that Ridley and Dark Samus are alive and stronger than ever. The latter has overthrown High Command as the ruler of the Pirates, and she is in possession of Phazon's first and ultimate weapon; the Leviathan seeds, semi-sentient organic meteors that are each designed to crash into a heavenly body and contaminate it with its life-killing mutagen.

After Samus and her compatriots are blasted into comas by her doppelgänger in a last-ditch attempt to keep them from destroying a Leviathan seed aimed at the Federation stronghold, they become contaminated: their bodies begin self-generating the toxin until they succumb to madness and become its slaves. The Federation does what it can to help them control their condition, before sending the quartet to the stars to stop the Corruption Crisis once and for all. They must travel to other planets infected by Leviathans and battle Dark Samus's forces, all while fighting the effects of Phazon within them. Who will emerge triumphant?