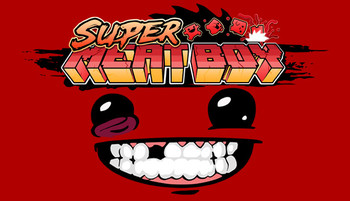 Meat Boy is a game about pain. It is a game about understanding pain in its purest, most unadulterated form, forcing you to go into a fit of madness. It's also an affectionate callback to all of the controller destroyingly difficult games of the late eighties and early nineties, and all of the clichés that go along with them, but at least here the levels are (usually) short and the lives (usually) infinite.

You play as Meat Boy, a skinless boy, trying to save his girlfriend made of gauze, Bandage Girl, from the clutches of Dr. Fetus, a nefarious fetus being in a jar that may or may not have a PhD. It's not exactly the most original plot ever conceived, but the game's still very imaginative. And painful, as Meat Boy must traverse though worlds filled with buzzsaws, syringes, lava, buzzsaws, salt, homing missiles, and buzzsaws. Did we mention buzzsaws? Cause, yeah, there's a lot of them. We mentioned pain too, right?

was later released on December 8, 2008. A sequel, Super Meat Boy, was released on Xbox Live Arcade and PC in Fall and Winter of 2010, then later ported to the PS4, Playstation Vita and Wii U. A WiiWare port was planned as well, but it was later cancelled as Nintendo's 40 MB limit for WiiWare games was much too small for the developers to work with. The game follows the same story as the flash game, where your goal is to save the girl, except there are a lot more levels including warp zones and obstacles to face, more polished gameplay, and more of a story going on. The game reached major popularity and critical acclaim among gamers, receiving strong sales and even winning some awards.

A third game for PC and Nintendo Switch, Super Meat Boy Forever, was released on December 23, 2020, where instead of playing as Meat Boy trying to save Bandage Girl, you instead play as either Meat Boy or Bandage Girl trying to save their baby daughter Nugget who has been kidnapped by Dr. Fetus, who also makes a return as the Big Bad. The sequel is different from its predecessor, as the gameplay now has an autorun mechanic similar to BIT.TRIP and Canabalt, but giving you the ability to turn around by walljumping. The sequel also introduces new enemies, hazards, and gameplay mechanics such as punching and dashing. The animation is also vastly different, dropping the Stylistic Suck of the original games and going for a more cartoonish, fluid style of animation. A Tabletop Game called Super Meat Boy Forever: Rival Rush was also released in 2018 as a tie-in. Naturally, the switch to autorunner meant a drop in difficulty as the game appealed to casu- wait, what? It's still kicking ass? And in this genre? Yep, you're not getting a break from the pain.

Meat Boy also appears in the BIT.TRIP series as a member of Commander Video's Five-Man Band. In return, Commander Video appears in Super Meat Boy as an unlockable character. Meat Boy and Dr. Fetus (as well as Bandage Girl in the remake) are also featured in The Binding of Isaac as unlockable items, while C.H.A.D shows up as a boss with a matching item drop. Meat Boy has also made cameo appearances in plenty of other games.

Compare I Wanna Be the Guy, Syobon Action, and Kaizo Mario World, which are difficult through sheer unfairness, rather than Meat Boy's brutal, but fair design. Also compare 1001 Spikes.