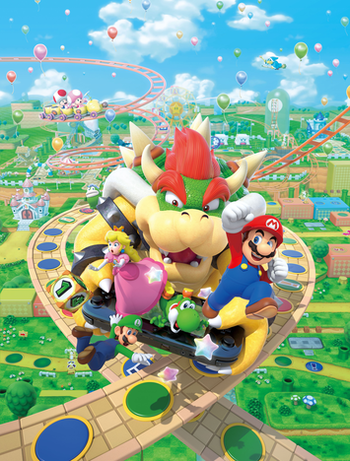 Just another day living ten coins at a time.
"Smash Bros. is how you build friendships. Mario Party is how you destroy them. Ironic, isn't it?"
— Random commenter on

an unrelated page, whose comparison sums up the series.

Mario Party is Nintendo's long-running series of multiplayer games for the Nintendo 64, GameCube, Game Boy Advance, Wii, DS, 3DS, Wii U, and Switch. It started off developed by Hudson Soft and CAProduction, though Hudson's acquisition by Konami led to 9 and later games being developed by Nd Cubenote which also contain some ex-Hudson Soft developers, developers of Wii Party. The series also created arcade adaptations, which are developed by Capcom.

The series combines a board-game motif with various competitive mini-games. Besides Mario, Luigi and their friends, some of the enemies from Super Mario Bros. are playable characters in the Mario Party series. About a dozen Mario Party games have been released so far: eleven on home consoles, one on the Game Boy Advance, one for the e-Reader (actually a non-collectible card game with included minigames), one on the Nintendo DS, two in arcades, and three on the Nintendo 3DS. The basic format of the game has mostly remained the same: Four players (computers filling in if there aren't enough human players) take turns rolling dice to move across one of several themed boards, with the ultimate goal of obtaining Stars, which are classically obtained by a player who reaches a Star Space and buys a star for 20 Coins, after which the Star Space is moved to a random location on the board.

After all players have had their turn, a mini-game begins. The players are placed on Blue or Red teams based on what spaces they had landed on (Green players are randomly marked Blue or Red) and a roulette begins to pick a game. The winner(s) of these games are typically awarded with 10 coins (in the first Mario Party the loser(s) may lose coins), although there are special games where the goal is to collect coins, in which case everyone gets to take however many coins they collected in the game with them.

Mario Party 9 changed the board game concept to have one vehicle that all the players take turns captaining. Mini-games only start when a mini-game space is landed on (and sometimes at random on blue spaces). Coins are gone, and stars are replaced with mini-stars, which are collected several at a time both on the board and in mini-games.

Mario Party 10 retains 9's changes but its star is Bowser, who is playable for the first time (not counting a bonus game in 4 and Super Duel Mode from 5). Whoever plays as him can ruin the other players' days. The game is confirmed to have amiibo functionality: The game is compatible with Super Smash Bros. figures, but there is also a new set of figures dedicated to Mario Party 10. This set includes Mario, Luigi, Peach, Yoshi, Bowser, and Toad. Mario Party 10 is compatible with 9 figures in total: The first six, plus Rosalina, Donkey Kong, and Wario.

The games are infamous for their high propensity for screwing your opponents over — random chance and luck are large components in these games, and it's not uncommon to see people lose their shot at winning and sink to the bottom of the leaderboard, and for those who have had terrible luck all game suddenly be in the lead. Despite this, skill in the mini-games and careful planning are also equally rewarding and useful, and a smart player can easily maneuver themselves into a good spot. It's also known for its AI controlled opponents, which can be equal parts ludicrously stupid and deviously intelligent, capable of feats of incredible planning and execution followed by stupidity in the minigames after their turn.

Most of the games (with the exception of 1, 2, 6, 10, and Star Rush) include some form of Single-Player campaign, which typically involves playing against computers on the game boards, but the mechanics may be slightly different.

Games in this series
Each entry typically has a unifying theme that dictates the aesthetics and occasionally gameplay, along with a character or group of characters serving as the host.

Gameplay footage of the first Mario Party game from a minigame aptly titled "Ground Pound". In it, the player character has to use the ground-pound technique on all of the flat stumps within thirty seconds to win.

Gameplay footage of the first Mario Party game from a minigame aptly titled "Ground Pound". In it, the player character has to use the ground-pound technique on all of the flat stumps within thirty seconds to win.