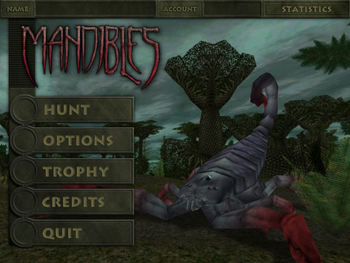 If you though regular scorpions are bad, wait until you meet Pulmonoscorpius. And even that isn't the worst thing about the Eos Sector...

A freeware stand-alone mod for the Carnivores series, created by Dory Holtzman (creator of Poharex), Mandibles expands upon the canon established by the original trilogy and adds an entirely new region to the alien planet of FMM UV-32 with its own unique animals and challenges. If you're a fan of the series or just looking for a hunting simulator with a twist, it's well worth your time. It is a sequel to both the original trilogy and Dory Holtzman's previous work Carnivores Triassic.

While the complete version of the game hasn't been finished yet, the Beta 1.99 was released on September 4th, 2018.