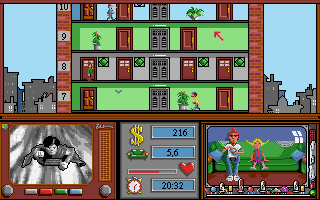 You are watching the watchers.
Advertisement:

Mad TV is a 1991 Simulation Game for MS-DOS and the Amiga, which casts you as an executive producer working for one of the three competing TV stations that occupy the same building. By buying movies, signing ad contracts and setting up the daily schedule, you're trying to get your company to the top. Your real objective, though, is to win the heart of the sexy culture show host, Betty... but your two competitors have the exact same motivation.

Perhaps the most memorable thing about this quirky, humorous game is its interface; to move between various screens, you have to literally walk around the building and wait for elevators, and you click on people in their rooms to talk with them.

Had a sequel released in 1996, as well as an unofficial sequel named Mad News. Completely unrelated to its TV series namesake.