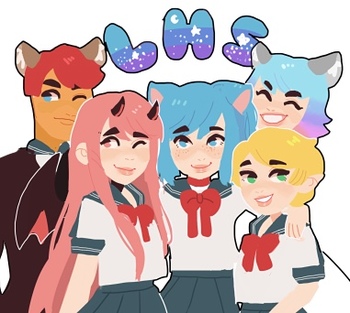 "Far from all modern civilization is a crescent-shaped island in the middle of the ocean proudly known as Lunarhill. In fact, it's so hidden, I don't even think it's on most maps! Lunarhill is a thriving society completely absent of all humans. Yep! It's the only place in the world where only monsters live among each other instead of the usual coexistence of humans and monsters."
— Colette at the very beginning of the game

Lunarhill is a game made in the RPG Maker VX Ace engine about five monster students that are given the responsibility in protecting their school from harm. The game is currently under development, but much more info about it can be found on its official wiki

The game is set in the year 20XX, where both humans and monsters exist on Earth. Mythical creatures are known to be shunned by humans upon due to their appearance and dangerous powers, so monsters found an uninhabited island to create a life on away from the judgement of humans. They called their land Lunarhill, built with towns, shops, and even schools. From that point onward, they were able to roam free without any backlash from humans. In time, Lunarhill became its own independent country, federated entirely by monsters to ensure safety to all monsters in the world by offering them a safe haven away from all human intervention.

Things stayed that way for a long while, until the environment suddenly became more dangerous. Out of nowhere, monsters began attacking their own kind. No one understood how or why this happened, and this led to many monsters feeling unsafe. The Headmaster of Lunarhill High School decided to create a club consisting of his most powerful students to protect the school. It was named the Lunarhill Defense Forces, made up of four teams that were to patrol the land around the school and fight off any feral monsters that come their way.

Colette the succubus is asked first to join the team, along with her friends Azalea the fairy, Azura the neko, Wolf the werewolf, and Sourplum the mage and neko/werewolf hybrid. The five friends reluctantly accept and adventure on around Lunarhill, trying to save their land from the supposed threat that may be a lot more dire than they first realize. The rest of the story tells itself.