This page covers the video games made for the Lilo & Stitch franchise, all of which shown here are published by Disney Interactive except where noted. Any crossover instances found in other Disney games do not count.

Lilo & Stitch video games with their own pages (all based on the original film and arranged in chronological release order): 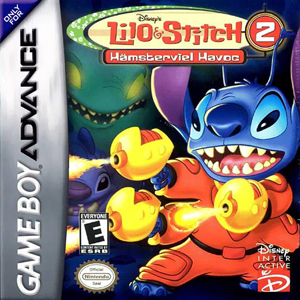 A standalone sequel to the 2002 GBA game that serves as the only tie-in game to Lilo & Stitch: The Series. It was developed by Climax Studios and released on October 12, 2004, between the show's two seasons. The game is a Shoot 'em Up Platform Game like its predecessor.

Not to be confused with Lilo & Stitch 2: Stitch Has a Glitch, which was released the following year.

Tropes relating to Hämsterviel Havoc include: 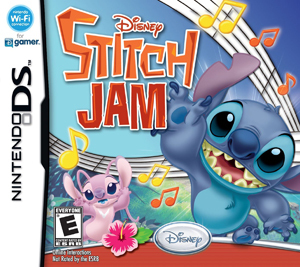 The North American cover to the first Stitch Jam.
A pair of Rhythm Games for Nintendo DS that are tie-in games for the Stitch! anime. Both games were developed by Cattle Call. The first game, Disney Stitch Jam,note Stitch! DS: Ohana to Rhythm de Daibouken was released in Japan on December 3, 2009, in North America on March 23, 2010, and in Europe on March 26, 2010, and is based on the Madhouse-produced first two seasons. The sequel, Motto! Stitch! DS: Rhythm de Rakugaki Daisakusen ♪,note More! Stitch! DS: Great Mission to Doodle in Rhythm ♪ was released only in Japan on November 18, 2010, and is based on the Shin-Ei Animation-produced third season, Stitch! ~Best Friends Forever~.

Tropes relating to the Stitch Jam games include: