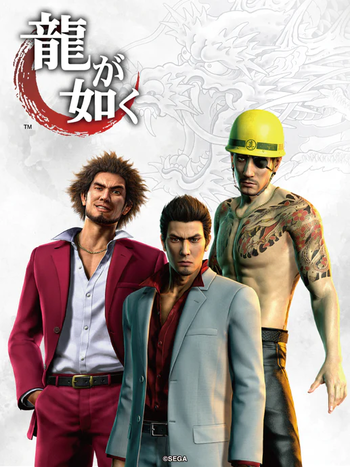 Rolling eyes fall...
Ruling dies out...note From left to right: Kasuga Ichiban, Kazuma Kiryu, Goro Majima
"I can take another name, and build a new life... But on the inside I'll always have that instinct, no matter how much I hate it. I'm yakuza through and through. Guile only gets you so far in this game. Remember that. You won't get another chance."
— Kazuma Kiryu, the Dragon of Dojima, Yakuza 5 note Original PS3 localization. The remaster retranslates this line.
Advertisement:

Like a Dragon (龍が如く Ryū ga Gotoku) — formerly known in the west as Yakuza — is a Beat 'em Up/Sandbox/JRPG video game series that follows the exploits of the Japanese underworld. Featuring twisted conspiracies, gang warfare, soap opera plot twists, cool tattoos, bizarre sidequests, huge shirtless men punching each other over their ideals, and more minigames than you can shake a stick at, Like a Dragon is as much an intense, heart-pounding crime drama as it is an avenue for exploring intensely-detailed virtual districts of Japan and partaking in numerous diversions and side activities.

Like a Dragon was conceived by veteran game designer and Sega employee Toshihiro Nagoshi in the early 2000s. His pitch was met with skepticism among Sega's brass, who were hesitant toward the proposed game's adult themes and its focus on organized crime; they also believed that the extremely Japanese flavor of the game would make the game have less appeal outside of Japan. Nagoshi still staked his career on getting the game produced, and got the project off the ground after some convincing. The first game was released in late 2005, and got heavy acclaim in Japan for exploring yakuza culture with previously unseen depth and authenticity; it was also a massive sales success, ensuring a localization and the release of several sequels and spin-offs.

Like a Dragon games take place in an sandbox setting, with the most prominent location being red light district Kamurocho (神室町; Kamuro-chō, a fictionalized version of the real-world Kabukichō), Tokyo, with other cities of Japan coming and going between different games. Beyond the linear focus of the main story, there's a truly staggering amount of sidequests, minigames, and secrets scattered about. Players can solve the problems of myriad people on the street, play in hidden illegal gambling halls, hit some balls at the batting cages, learn powerful moves from an enigmatic martial artist, take part in underground fighting tournaments...

The combat up to Yakuza 6 (and still present in the Judgment spinoffs) is a 3D beat 'em up with RPG elements. Scoring hits and dodging attacks will fill the Heat gauge — in most games, keeping the meter filled will increase the character's speed and damage, or the gauge can be spent to activate a powerful, context-based attack called a Heat Action. Combat becomes more complex as the series goes on, from introducing multiple characters in 4 to the addition of a Stance System in Ishin!.

Although Like a Dragon is one of Sega's flagship franchises, the series took a long time to actually get there outside of Japan, where it remained a cult classic for many years. The commercial failure of spinoff Dead Souls seemingly halted all localization plans, and the English website for the series was shut down in September 2013. In December 2014, Sony announced a partnership with Sega to localize future games, beginning with 5, which was finally released in English in 2015. Prequel Yakuza 0's English release in 2017 and subsequent PC port a year later brought many newcomers into the series and restored Sega's confidence in its success outside of Japan. The success of 0 ensured localizations of the first two games' Kiwami remakes, and eventually, remasters and new localizations of 3, 4, and 5. Lost Judgment, released in September 2021, was the first game in the series to have a simultaneous worldwide release.

In 2022, it was announced that the series will ditch the Yakuza title in the west and will be going by the name Like a Dragon as it does in Japan.

See also Binary Domain, a sci-fi Third-Person Shooter developed by Ryu Ga Gotoku studio in the downtime between Yakuza 4 and 5, which features Kiryu, Majima, Goda and Akiyama as guest characters.

Games and other media revolving the Yakuza/Like a Dragon franchise:

With Kiryu travelling through an absurdly-spacious sewer system to evade detection by the Dojima Family, Kuze catches him off-guard by riding a god-damn motorcycle through the tunnel at high speed, thwacking him with a pipe! Though he immediately loses control and wipes out after the successful joust, you should know that this little inconvenience won't stop him from continuing to be able to fight.

With Kiryu travelling through an absurdly-spacious sewer system to evade detection by the Dojima Family, Kuze catches him off-guard by riding a god-damn motorcycle through the tunnel at high speed, thwacking him with a pipe! Though he immediately loses control and wipes out after the successful joust, you should know that this little inconvenience won't stop him from continuing to be able to fight.