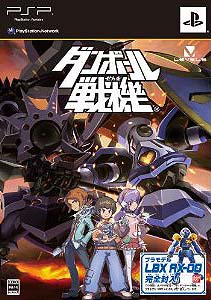 LBX: Little Battlers eXperience (Danball Senki) is a PlayStation Portable RPG, developed by Level-5 and released on June 16th, 2011. Players assume the role of Ban, a young boy who is a fan of LBX, or Little Battlers eXperience, a line of toys which are equal parts model kit and fully functioning robot. They are most commonly used to battle each other in miniature diorama arenas. One day, he is approached out of the blue by a mysterious female scientist who hands him an attache case containing a prototype LBX called "AX-00", which the scientist claims is "the key to saving the world". Unbeknownst to Ban, however, is the fact that the model is wanted by a mysterious group, and he soon finds himself being hunted by the group's masked agents.
Advertisement:

The franchise was adapted for the West. The English version of the anime began airing in 2014, though as an abridged version that cut 44 episodes corresponding to the original game down to 26. The W-based episodes aired in 2015 as LBX's second season, cutting down its 58 episodes into 49. In the United States, the show is broadcast on Nicktoons.

A localization of Boost was released on August 2015 in North America, and in Europe one month later.

Now has a new spinoff series, Soukou Musume in development for 2018.