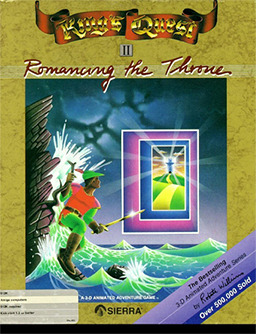 King's Quest II: Romancing the Throne is the second game in the King's Quest Adventure Game series. Graham, now king of Daventry, has recently come to a realization; without a proper queen by his side to produce potential heirs, his legacy as king will be quite short. The Magic Mirror he retrieved from the first game reflects an image a beautiful maiden from the land of Kolyma named Valanice, who is trapped in a quartz tower by the evil witch Hagatha. Graham dons his adventurer's cap once more and resolves to rescue her. Along the way he must find three keys to access the land of Kolyma, help King Neptune, and kill Count Dracula before he can reach the island Valanice is trapped on.

Despite introducing Valanice and featuring some rather beautiful-looking backgrounds, the game is generally considered to be one of the weaker games in the series, with its flat storyline, frustrating puzzles, and confusing setting. A fan-made remake, King's Quest II: Romancing The Stones was released by AGD Interactive, adds to the story and replaces the frustrating puzzles by other frustrating puzzles.