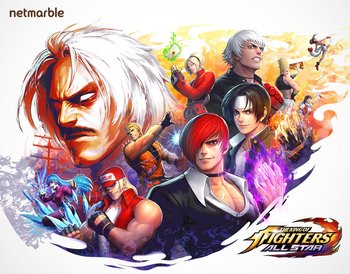 The King of Fighters: All-Star is a free to play, mobile RPG game released for iOS and Android, developed by South Korean gaming company Netmarble and licensed by SNK. The game brings together all the characters of the KOF series up to The King of Fighters XIV. While including KOF series fighters, the game also includes limited crossover events with other franchises and companies, including Gintama, Samurai Shodown, Tekken, and WWE. In addition to crossovers, the game also holds special events that introduce fighters with holiday themes, references to pop culture, and gender-bent characters.

The game initially released in Japan on July 26, 2018. After high demand from South Korea, the game was released there on May 9, 2019, having gone through tests at events since the end of 2018 and holding special venues for promotion. The global launch was on October 22, 2019.

The player wakes up in the world of The King of Fighters without any memories. With the help of an energetic girl named Noah, the player must participate in the tournaments from The King of Fighters '94 and onwards, and win, hoping to remember who they are and how they ended up there. The player, however, is constantly accosted by various punks that somehow wanted to see them dead or steal their invitation letter to the point it's like something is planned. Meanwhile, however, a sinister group calling themselves 'Tuners' continues to watch over the player's movement, with a plan in motion that they want to put a stop on the player's journey.