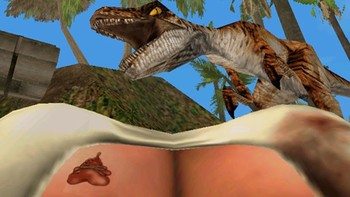 A pretty accurate summary of the game.
"Let's make this clear: Trespasser is not a good game. It could have been a good game. It had the potential to be a good game, but what was released in late 1998 and sold to the public was simply not a good game...You can liken it to babysitting a big, lovable and slightly retarded child. You know he means well, but that doesn't stop him from dropping trou and shitting in the middle of the aisle in Costco from time to time."
— Research Indicates, Let's Play Jurassic Park: Trespasser

Jurassic Park: Trespasser is an infamous First-Person Shooter game released in 1998 for PCs by Dreamworks Interactive, developed as a tie-in to the film The Lost World: Jurassic Park. The game stars Anne, a plane crash survivor who finds herself on the shores of Isla Sorna, also known as Site B, two years after the events of The Lost World, and desperately needs to find a way off the island, armed with nothing but her wits and one lone (surprisingly strong) noodly arm for her to pull boxes and throw rocks around with.

Trespasser was an extremely ambitious project, flaunting a skilled development team (with the occasional contribution from Steven Spielberg himself), a fully three-dimensional game engine with incredible draw distances, massive, sprawling outdoor environments, a full physics engine to simulate objects realistically, and artificially intelligent dinosaurs that would react accordingly to the player's actions...or that was the plan anyway. In practice, Trespasser was much less impressive: The developers were strapped for time and had to delay the game again and again, until they were forced to cut back on features and quality assurance just to get the game to ship on time, and the game that was released in 1998 was a glitchy, broken mess that was nearly impossible to play on most computers at the time.

Initially considered a massive disappointment, most consumers eventually forgot about the game when, within a few years, their attention was drawn to the spectacular Half-Life and the even-more-awful Daikatana. The game's legacy lives on, though, because Trespasser still has an active mod community, dedicated to ironing out the game's problems, and the game essentially laid the groundwork for later developers in terms of game engines and interactive physics: Valve Software in particular considered Trespasser a major source of inspiration for Half-Life 2 and its physics engine. If you'd like to try it out for yourself, good luck: The game sold only 50,000 copies at its time of release, and even if you find a copy, don't even bother running it on an "old games" box. What it did in 1998 made it unplayable, far moreso than what Crysis did to late 2007 computers.

A fan remake is currently in development