Video Game / It Came From The Desert 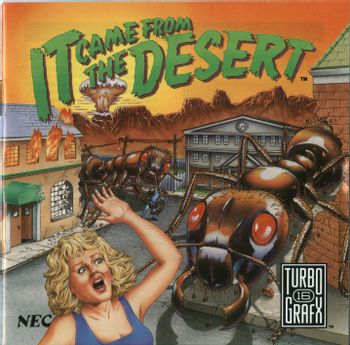 "The desert. Unchanged for millions of years. Yet witness to a biblical prophecy come true that one day, the meek shall inherit the earth."
— Opening narration
Advertisement:

It Came From The Desert is an 1989 Amiga game by Cinemaware about a young man discovering the existence of giant ants hell bent on taking over the world. With help from a scientist and some friends, he will need to collect evidence within a time limit to convince the mayor to take action. Gameplay segments include interacting with NPCs, knife fighting with a gang member, shooting an Ant's antenna before getting attacked, fending off said ants, and eventually infiltrating the ants base and blowing up the queen.

While mainly an Amiga game, with a follow up made for the system, it was also released for the IBM Personal Computer. Two remakes were completely different: a Turbo Grafx CD version that relied heavily on Full Motion Video and had little to do with the original game (Retsupurae riffed on it

), and a Sega Genesis version that was an over-head shooter and was canceled by Electronic Arts when almost finished.

was made, changing much of the story. It does play snippets of the original Amiga game during the end credits.

It Came from the Desert includes examples of: