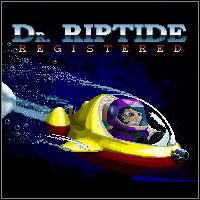 In Search of Dr. Riptide is an MS-DOS side-scrolling, action-adventure game that was developed by MindStorm Software and produced by Pack Media in 1994. It is set in the Great Barrier Reef of Australia.

Dr. Riptide is hell-bent on turning all of the world's marine life into high-protein slurry, and must be stopped. Nick, a secret naval agent, must navigate his way through both natural caves and man-carved tunnels in order to find Dr. Riptide.

Nick battles many aquatic creatures including two giant marine life-based monsters, Oscar the giant bionic fish and Otis the giant octopus. On his journey he travels through the chambers and ruins of a Greco-Roman Lost City of Atlantis. All the while, Nick salvages for oxygen, ammunition, weapons and gold coins.

Eventually Nick makes his way deep underwater, under many feet of coral, to the metal-encased laboratories of Dr. Riptide. There he battles the nefarious Doctor, who pilots a large, weapon-equipped submarine. Nick defeats Dr. Riptide, Riptide's submarine breaks down, and Nick tows him away to the authorities.