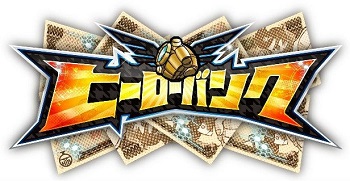 Change your money with justice!
"Having a man scream, "HEEEEEROOOOOOOOO BANKUUUU" will never get old for me."
—Sega Driven's article on the announcement of Hero Bank 2

Hero Bank is a multimedia franchise created by Toshihiro Nagoshi, the man behind the Super Monkey Ball and Yakuza series. It's published by Sega and it consists of several video games (Arcade and Nintendo 3DS with the original game released on March 20, 2014, and Hero Bank 2 released on November 27, 2014), a trading card game, a manga adaptation published by Shogakukan's Monthly CoroCoro Comic, and an anime adaptation made by TMS Entertainment, which first aired on Japanese television via TV Tokyo on April 7, 2014, that consists of 50 episodes, directed by Yasutaka Yamamoto. Unlike the games that aren't released outside of Asia, the anime adaptation is available via Crunchyroll.

The series takes place 20 Minutes into the Future where the public can join in a virtual fighting game called "Hero Battles". To be able to participate in these games, they must use special fighting hero suit-type armor called Bankfons G suit or Hero-Gis in Japanese. It centers on a young elementary student named Kaito Gosho, who ended up signing a business contract to secure a Bankfons G suit called Enter the Speed since he is willing to help others to resolve their problems. However, the contact also forces Kaito to take the responsibility of paying a 10 billion yen debt. To help solve the problem Kaito got himself into, he decides to enter Hero Battles and win money from the various matches to pay off the debt when he can. Kaito is later helped by his friends, who also enter the games. As they got into more Hero Battles games, they later get involved in a conspiracy that threatens the survival of the game, which dates back to when Hero Battles were first created.

The official websites of the original game

and the anime adaptation

are available for viewing.

A work in progress. Anyone is welcome to help improve the article.