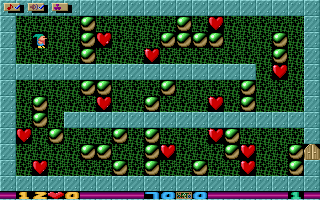 Heartlight is a puzzle game originally developed by Janusz Pelc for 8-bit Atari in 1990. In 1994, an MS-DOS port (Heartlight PC) was published by Epic Megagames along with two other games by Janusz Pelc in the Epic Puzzle Pack. The shareware version contained 20, the full version (Heartlight Deluxe) 70 levels. In 2006, Maciej Miąsik, co-author of the DOS version, recompiled it and released it under the Creative Commons Attribution-ShareAlike 2.5 license.

Not related to the trope Heartlight, despite the same name.