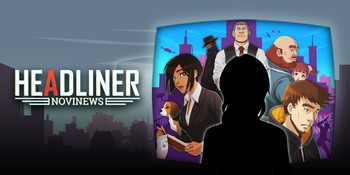 Headliner: NoviNews is a 2018 indie point-and-click/visual novel game made by Unbound Creations.

You are the newly-hired Headliner of NoviNews, the most influential newspaper in Novistan. Every day, you get a stack of articles, and choose which ones get in the paper and which ones don't. Simple, right? Well, not exactly, because Novistan is a country with lots of hot topics. From a xenophobic and controversial Prime Minister to fears over new genetic modification technology, from national-vs.-private-healthcare debates to a new artificial alcohol named BetterBuzz, everyone is looking to your paper for information. And every article you publish- or don't- will have consequences on the population's attitude.

After work each day, you walk a few blocks back to your apartment. Along the way, the streets reflect how things are going- stir up opposition to the government and you'll see protests, support increased police presence and drones will be whizzing by, and so on. There are a few characters that you can talk to each day:

These people are influenced by the articles you publish, but you can also help them and give them advice in conversation. This will have a heavy impact on their ultimate fates.

Furthermore, completing the game once unlocks another character: Helene, a police officer who you can help solve a murder. If you help her, she opens up to you about her struggles with PTSD and her personal doubts about the police career.

If you haven't guessed already, the game heavily focuses on Multiple Endings. The game itself is relatively short, taking place over 14 days, but multiple replays are needed to see all the different routes that unfold from taking different stances on issues. Any given ending is simply made up of how each character fared, the country's position, and the Headliner's fate. There is no Golden Ending, fitting for a game about complex political issues... but there are more than a few bad ones.

The game was preceded by the smaller 2017 title HEADLINER, set in Novistan's neighboring country (and fellow dystopia) of Galixia.

Compare with Papers, Please and Not Tonight, other games with relatively simple mechanics, a dystopian near-modern setting, and tough moral choices.

Due to the Butterfly Effect nature of the game, where almost all possible events are determined by the player's decisions, unmarked spoilers abound for consequences of actions. Beware!