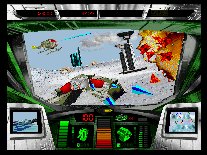 Havoc Is a little-known First-Person Shooter by defunct developer Reality Bytes, released in 1995. They made only two other games: a Mac-only Doom clone called Sensory Overload before Havoc, and a third-person Hack and Slash fantasy game called Dark Vengeance, after Havoc. It was advertised as a Killer App for Windows 95, pushing that OS's graphical and networking capability. In the vein of Battlezone, Havoc put players in control of a combat vehicle and pitted them against hordes of foes.

The singleplayer campaign cast you as a sort of land-Pirate, a freelance tank commander wandering the battlefields of a post-apocalyptic Earth ruled by Mega Corps in search of useful loot and supplies. Your enemies are the Mooks of Tyrakian Global, one such Mega-Corp. Their forces are spread across three major regions: The mountainous, rocky Badlands, the frozen Fallen Wastelands, and the bizarre, colorful Tyrakian Territories. In each level, there are three Gate Keys to find, each guarded by a powerful Sentry Gun and numerous other foes. Find the keys, then find the exit. Do this for three levels and fight a boss. There are over 30 levels total and six Bosses. You have a wide variety of weapons to use, and a choice of three vehicles.

For its time, the game incorporated a number of cutting-edge features: Varied environments and terrain, terrain deformation, support for virtual reality goggles of the time, and cross-platform multiplayer between PC and Macintosh. The game worked on either system out of the box, and came with a multiplayer-only second disc that could be given to a friend. If you had enough discs to go around, 16-player deathmatches were possible.

This game shouldn't be confused with either film called Havoc. Or the Havok physics engine.