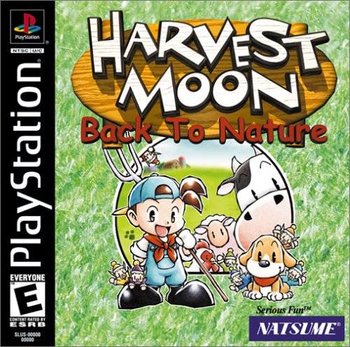 Harvest Moon: Back To Nature (Bokujo Monogatari: Harvest Moon in Japan), released in 1999 for the Playstation, is the fifth game in the Harvest Moon (now Story of Seasons) series and the first on a non-Nintendo platform.

The plot goes as followed: As a young boy you visited your grandfather's farm one summer. As he was too busy to play with you, you were left to your own devices. You met a girl around your age and became friends with her. At the end of the summer you left for home but promised you would return some day. Years later, now an adult, your grandfather has recently passed and you decide to take up his old farm. The mayor decides that if you can return the farm to its original state within three years you would be considered the rightful owner. If not you would be forced to leave.

Like all other Harvest Moon titles the main theme of the game is farming, ranching, and building relationships with the other villagers. You can court the local bachelorettes, marry one, and have a child.

A year after release in Japan a Distaff Counterpart, Bokujo Monogatari: Harvest Moon For Girl, was released. The gameplay is largely the same but the backstory is different and you play as a female protagonist. While sailing you become shipwrecked and are rescued by a mysterious man. You end up in Mineral Town, and with nowhere to go you decide to take care of the local farm. For Girl wouldn't receive an official English translation until 2005 with the release of Harvest Moon: Boy and Girl, PlayStation Portable ports of the two PlayStation games.

Friends of Mineral Town and More Friends Of Mineral Town for the Game Boy Advance are for the most part ports of Back To Nature and Back To Nature: For Girl. There are slight personality changes, new backstories for the main character, and updates but they're basically sprite versions of the Playstation titles. A Wonderful Life happens concurrently with FOMT storywise. Initially released on the Game Boy Advance in 2003, both titles have been re-released on the Wii U Virtual Console in 2015.

A remake for the Nintendo Switch has been released under the name Story of Seasons: Friends of Mineral Town. Content-wise it draws from both two GBA titles.

Along with A Wonderful Life, these set of games are the most well-known and popular in the franchise. Characters from them have appeared in several later games in the series.