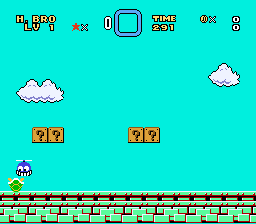 "In MCMLII [1952] Hammer Bro takes the decision to be independent. Leaves home to fight against the imperator."
—Intro message box, Orange Version
Advertisement:

Hammer Brother Demo 3 and its finished "English" version is a Super Mario World ROM hack by Blackout77, widely considered to be the Mario Hacking community's (and by extension, the entire Mario fandom's) equivalent of My Immortal.

For those who wish to play it for some reason, you can download patches for Demo 3

by clicking on the links.

Bombs would explode in
XC Seconds, Hammer Bro
was smart to defeat
Crash Man before the
bombs exploded ... if
Bombs explode
Hurry only and Hammer
Bro would go wrong.