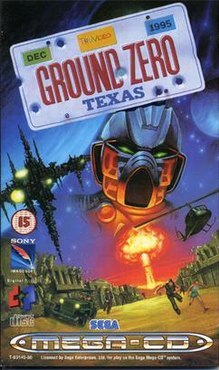 Ground Zero Texas is a FMV game from Sega meant for the Sega CD, later given a remastered edition in 2021 for the PlayStation 4 and Steam.

The game takes place in the fictional El Cadron, TX, a small border town. You play as a member of a special forces unit who have detected aliens called Reticulans within (see what they did there).

The Reticulans can disguise themselves as humans and have been kidnapping and replacing most of the residents. Your job is to monitor certain areas with a special stunning particle beam cameras and shoot them when they try to disable them as the rest of the forces investigates and tries to stop the invasion. Hastening matters is the fact the task force is a last ditch effort and if they fail, the whole area will be nuked (hence the title).

On an interesting note, when making the game, Digital Pictures used a real Hollywood crew for it, though they had to go through the Directors Guild, Screen Actors Guild and Writers Guild to do so. A first for a video game. Sadly the hardware for the system lowered the quality that this is hardly noticeable in the game.

Not to say it's not playable though, the game does a good job of building tension and slowly ramping up the challenge as the game goes on (though the last bits do get a bit repetitive). The B-Movie style plot doesn't hurt either.

You can find a longplay of it here