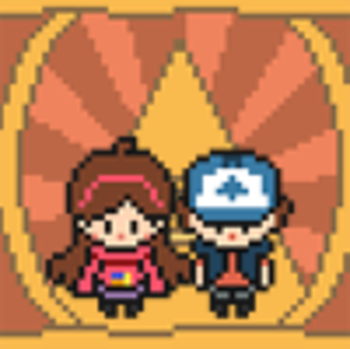 PinesQuest: (A Romance of) 2Dimensions, often shortened to PinesQuest 2D or PinesQuest 2Dimensions, is a Gravity Falls fan game created by T.N. Newton (along with a handful of contributing artists). The game is a dungeon crawling RPG that serves as a Fan Sequel to both the official browser game PinesQuest

and the show itself, picking up right where the TV series left off.

After their summer of adventure, Dipper and Mabel Pines are on the bus headed home when they suddenly find themselves somehow transported back to Gravity Falls. As they attempt to figure out what's going on, they realize many areas of the town have become labyrinthine, and the supernatural creatures they've encountered (even those that were previously friendly) are now hostile towards them, attacking them on sight for unknown reasons. The rest of the game involves the Pines family and their allies trying to solve this new mystery and discovering the secrets of Bill Cipher, his past and his home universe: The 2nd Dimension.

(note that the game only runs natively on Windows, but includes suggested workaround methods for running it on a Mac). The full game, which will contain eleven total dungeons and nine playable characters, is currently still a work in progress. The game's production blog can be found here