Video Game / Grabbed by the Ghoulies 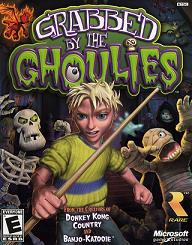 An Action-Adventure game by Rare Ltd., released for the Xbox in 2003 after a pre-release conversion from its original design for the Nintendo GameCube. Starring Cooper, a frightened but brave teenager whose girlfriend Amber is quite literally "grabbed by the ghoulies," yanked from Cooper's side by a pair of gargoyles and taken into Ghoulhaven Hall, a Haunted House along a road the duo wandered down after making a wrong turn. Half the game is spent trying to rescue Amber, the other half is spent trying to get to the master bedroom of airplane-obsessed Baron Von Ghoul so you can give him a thorough beating and steal the key to the front door.

Humorous and entertaining, but highly unsuccessful sales-wise. The game's lack of commercial success is repeatedly referenced for laughs in later Rare titles, such as Banjo-Kazooie: Nuts and Bolts.

Despite its lackluster initial sales, the game has been re-released as a download from the Xbox Live Arcade

, where it currently holds a rating of just over 3/5 stars based on 2,000+ votes, showing that it has gained at least modest popularity.

In 2015, the game was re-released in the compilation Rare Replay on the Xbox One; unlike the 29 other games on the compilation which were all brought back by either emulation or the Xbox One's Xbox 360 backwards compatibility feature, Grabbed by the Ghoulies was reprogrammed for the Xbox One as a HD remaster due to the absolutely (ahem) ghoulish difficulty of Xbox OG emulationnote As of 2015, there still isn't even a single remotely functional Xbox OG emulator. Just to show how absolutely complex that console was....