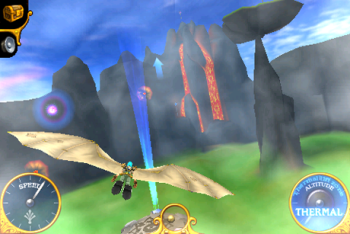 Possibly the most serene gaming experience on iOS
"I like dimensional rifts as much as the next girl, but how am I going to find my way home now?"
— Eryn, Glyder title screen

Glyder was a series of tilt-controlled flight simulation games designed by Glu Mobile, in which Irish Action Girl and Mad Scientist (and Casual Time Traveller) Eryn repeatedly finds herself trapped in large, dangerous and extremely vertical environments with nothing except the clothes on her back. Oh, and the huge homemade mechanical wings she never leaves home without, of course.

A rarity in iOS design, Glyder games are very peaceful and serene, with surprisingly beautiful vistas for a 3D mobile game. There are no time or death penalties, and the soundtrack is restful throughout. The pleasantly retro UI with dials for altitude and velocity fit nicely with the Steampunk style of the wings. All in all, it's a pretty delightful game.

Unfortunately, Glu Mobile had some difficulties adapting it to iOS4 in 2010. In a moment of brilliance, they decided the best thing to do would be to delete both titles from the App Store completely. The fanbase was less than happy

Not to be confused with the paper airplane simulator Glider.