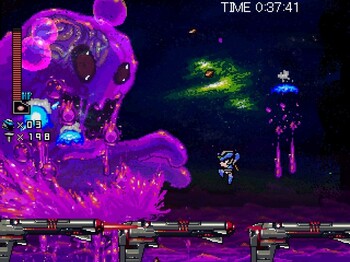 GIGADEEP is a freeware Mega Man-like game made in 2010 by Peposoft, the maker of Houkaimura and Minishooter RS Delta. It features the usual eight levels plus a fortress and a handful of playable characters. Ability upgrades can be brought at a shop, though most of them have to be unlocked first.