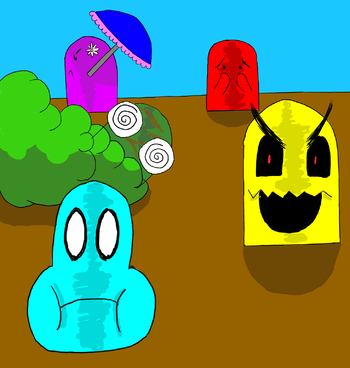 A great day to go out for a walk but then...GHOSTS!
Advertisement:

. You earn points by defeating the titular Ghost Bandits, which continually spawn all over the play field. All it takes to defeat a Ghost is to tap them until they vanish into white smoke.

There are five different types of ghost, each with their own movement pattern or gimmick:

Besides the Ghosts, a timer continually counts down until it reaches zero. When you're out of time, the game ends. You can add more time by touching a clock that randomly appears on the field. Their values ranges from 5 seconds to 20 seconds.

showcasing the app in action.

It also has an ongoing comic strip!