Video Game / Get Even 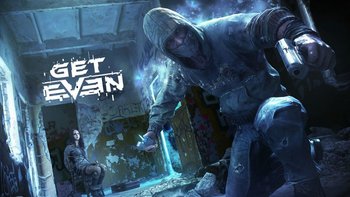 What is real?
Advertisement:

Get Even is a 2017 First-Person Shooter Psychological Thriller Stealth-Based Game made by The Farm 51 and published by Bandai Namco Entertainment. It was released on June 21, 2017 for PC, PS4 and Xbox One.

The game takes place on June 20, 2015 where Cole Black, a mercenary for hire, is recruited by an unknown party to raid a compound in the forests and rescue a girl named Grace, who is held hostage by armed gunmen. During the mission, he stumbles upon the girl with an IED device strapped onto her chest. Despite his best efforts, the explosive detonates before Cole can safely disarm it.

He awakens inside an abandoned asylum on June 22, two days afterwards. He is aided by a scientist by the name of Red as he explores what memories he has with a device known as Pandora, researching them to find out what had happened to the hostage and who was responsible for kidnapping her.

Be warned of spoilers, the game's key focus is on one's perception of reality and thus it has a heavily emphasis on plot and plot twists.