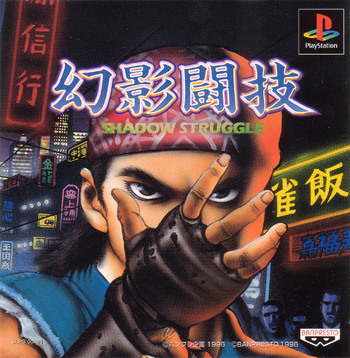 Genei Tougi: Shadow Struggle is a 1996 3D fighting game developed by Racdym (now Racjin) and published by Banpresto for the PlayStation. The game features blocky 3D characters and stages typical of the time with largely 2D gameplay. It has a faster pace than the average 3D PlayStation fighter as characters can quickly chain together strings of punches and kicks, execute juggles and more flamboyant melee special attacks, pull off very limited technical/evasive skills, and even enter a hyper state (think Bloody Roar or Street Fighter Alpha Custom Combos) where you can execute lightning fast attacks for a brief period and cancel into any move, making it less realistic like Virtua Fighter and more like Street Fighter EX or Bloody Roar. The game also possesses an interesting "Arena Mode" where you can edit a characters' special moves by shopping and gaining credits. It also has a nice soundtrack, lively backdrops that aren't all just static scenery, and smooth 60FPS gameplay. It managed to get a single sequel, Critical Blow, which was released a year later in 1997.

The story of Genei Tougi: Shadow Struggle revolves around a fighting tournament known as the P.O.S. (Power of Solid) and that it's sponsored by the Phillips Konzern: one of the largest and most powerful conglomerates to ever exist. The first game had an Excuse Plot in which eight fighters had came to the tournament for their own reasons and that all of them had sought to defeat Marry Phillips: the daughter of the prestigious Phillips Family and sponsor of the tournament. The sequel would attempt to add a few layers of intrigue into the story, in which a mysterious Chinese man named Merkuar had surprisingly seized control of the Phillips Konzern and had organized a second P.O.S., though this one is more shrouded and harsh than the last one. Aside from that, the plot of the second game had also revolved around a young boy named Rickey Leon and his companion, an android girl named Mao Chilling as they and the rest of the competitors find themselves targeted by Merkuar for an unknown yet dark reason.