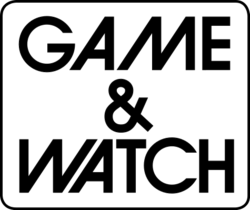 The Game & Watch series of simplistic games played on single-game handheld consoles. Most of the games rely on earning as many points as possible, with them ending once you run out of lives. There's usually a Game A and Game B option to adjust the game's difficulty slighly, but the main source of it is Difficulty by Acceleration anyway.

To see information regarding the hardware and a list of games running on it, please go to the Useful Notes page.

Tropes that apply to the original handhelds: