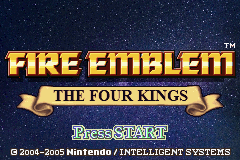 is a Game Mod of Fire Emblem: The Sacred Stones created by KrashBoomBang. Releasing its first patch in January of 2020 and being fully playable in June, it's one of a recent wave of fully completed ROM hacks that have come about thanks to the advent of FEBuilder making the hacking process more accessible.

Set in the continent of Ibril, the story follows the royal family of the eastern nation of Askia. The king, Terril, sends his brothers Walter and Lionel off on a diplomatic mission to Behanzin, on the opposite end of the map. Despite having hired an entire fleet of mercenaries, Walter angers them enough so that only one, a mysterious thief named Zachary, remains. The group slowly regains their lost mercenaries as they make their trek to Behanzin, the relationship between the two brothers is put to the test, and they're thrust into a war that will leave the continent shaken.

The Four Kings is a heavily player phase-centric game, where enemies have high offenses but mediocre defenses. Every playable unit (with the exception of your bard) has their own personal weapon or weapons to help set them apart from the rest of your army. With other implemented features like replacing suspending and resuming with mid-map savepoints and a concurrent route split, The Four Kings is certainly unique among its fellow ROM hacks.