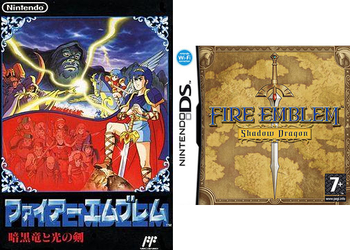 Our tale begins with the Shadow Dragon, the blade Falchion, ...and the Fire Emblem.
"Long ago, Medeus, king of the dragonkin, conquered the continent of Archanea, beginning an age of fear and despair for all its people. That tyranny was broken, however, thanks to a miracle. A young man hailing from the Altea region appeared with a divine blade in hand. He stood against the Shadow Dragon, and struck him down. [...] However, after a century's passing, the Shadow Dragon returned. He forged an alliance with a fiendish sorcerer who sought to rule the world, and their combined might toppled kingdom upon unsuspecting kingdom. Again, darkness threatened to engulf the continent."
— Shadow Dragon prologue
Advertisement:

Fire Emblem: Shadow Dragon & the Blade of Light is the first entry in the Fire Emblem series, released exclusively in Japan on the Famicom in 1990.

The game stars Prince Marth of Altea, descendant of the legendary warrior who once defeated the nefarious dragon king Medeus. A century after his defeat, Medeus is resurrected by the evil sorcerer Gharnef, and proceeds to restore his former empire and once more declare war upon the continent of Archanea. Marth is forced to exile himself to the island kingdom of Talys during an attack on Altea, in the midst of which his father is killed and his sister captured. Three years later, Marth departs from Talys, accompanied by a handful of allies, including the Princess of Talys herself, Caeda. From then on, the group embarks on a quest to retrieve the divine blade Falchion that was once used to seal Medeus away, traveling to many other kingdoms and recruiting numerous allies along the way to ultimately free the continent from the tyranny of the Dolhr Empire once and for all.

This game was a pioneer in the genre of Japanese Strategy RPGs, becoming the defining archetype which influenced most future games within the genre and being quoted as the reason it became hugely popular among Japanese players. As a precursor of not only the Fire Emblem series but also the entire tactical genre, it does suffer from many issues, such as a poorly-aged and confusing interface, along with many cases of Early-Installment Weirdness (a notable one being the lack of the now staple Weapon Triangle system). Still, while it received heavy criticism from Japanese publications for its complexity and lackluster graphics at the time of its release, player reception was far more enthusiastic, and Shadow Dragon & the Blade of Light remained the fourth best-selling entry of the series in Japan before it exploded in popularity with the release of Fire Emblem: Awakening.

Four years after its release, the game received an abridged remake one the Super Famicom as "Book 1" of Fire Emblem: Mystery of the Emblem, the third entry in the series, along with a direct sequel in the form of "Book 2" of the very same game. Tropes specific to that version of the game can be found on the Mystery of the Emblem page.

In 2008, a remake for the Nintendo DS was released called Fire Emblem: Shadow Dragon. It is the eleventh game in the series, and unlike Shadow Dragon & the Blade of Light was given an international launch. The remake makes a number of changes and additions to the gameplay of the original to make it more in line with its immediate predecessors, expands the story with new chapters and characters, and introduces the ability to reclass units.

An Updated Re-release of the original game was released for the Nintendo Switch for a limited-time on December 4th, 2020, as part of the 30th anniversary of the Fire Emblem franchise. In addition to several new quality-of-life features, the port features a complete localization, making it the first time the game has ever officially been released in English.

Shadow Dragon & the Blade of Light contains the following tropes: