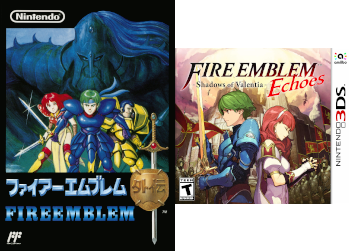 The Way of the Sword or the Way of the Heart.
“The earth split, the seas parted, and the heavens themselves threatened to come tumbling down. The battle transcended any that history had yet known.”
—The Book of Valentian Revelations, Chapter 15.
Advertisement:

Fire Emblem Gaiden is the second game of the Fire Emblem series, released only in Japan on the Famicom in 1992. While it takes place in the same world as its predecessor, Fire Emblem: Shadow Dragon & the Blade of Light, Gaiden focuses on the continent of Valentia, located to the west of Archanea, and its plot has minimal relation.

Many untold years ago, there were two sibling gods: the brother Duma and the sister Mila. The two had conflicting philosophies on how humanity should live, and their disagreements led to them fighting endlessly. Eventually they made a pact to end their conflict, which led to them dividing the continent of Valentia into two nations that would live for their god's beliefs. The nation of the south, Zofia, followed Mila and her teachings of pleasure and luxury. The nation of the north, Rigel, followed Duma and became a strong empire of proud warriors. However, as the years went by, both nations took their god's teachings to heart a little too much, and now the threat of war looms over the continent of Valentia.

The game is the odd duck of the series, featuring a lot of gameplay elements that have either not been replicated by its successors or only revisited once. There are more traditional RPG elements like towns and an overworld map that can be navigated, aspects of dungeon crawling, no Breakable Weapons mechanic, and Magic is learned via level-up and is Cast from Hit Points. It's also the only game Anna doesn't appear in. However, Gaiden also introduced the branching class changing system that would be refined by later Fire Emblem titles, leaving a significant mark on the series even if many of its ideas were abandoned or underutilized.

Following the worldwide success of Fire Emblem Fates, Gaiden was given a remake (made with the Awakening/Fates engine) for the Nintendo 3DS titled Fire Emblem Echoes: Shadows of Valentia, released internationally in 2017 after 25 years of it staying in Japan. Besides the prerequisite overhauls and upgrades to the game's presentation, the remake faithfully retains the original's mechanics while including more recent series elements such as Casual Mode (which turns off Permadeath) and Supports. It also introduces an item called Mila's Turnwheel that can rewind time to undo your actions, and there is now a fatigue mechanic somewhat similar to one used in Fire Emblem: Thracia 776 that inflicts debuffs on characters that are used too much (but only in dungeons). It features full voice acting for almost all dialogue in the game, with only minor NPCs and small-scale environmental exposition going unvoiced, and cutscenes animated by Studio Khara. It also includes a number of characters not present in the original Gaiden and features DLC like the previous 3DS Fire Emblem games.

Shadows of Valentia also has amiibo functionality. Scanning figures based on protagonists Alm and Celica unlocks a Bonus Dungeon and save the in-game character's stats, a copy of whom can then be summoned as a temporary AI-controlled ally. Fire Emblem amiibo from the Super Smash Bros. series, including Roy and Corrin, summons an image of that character. Other amiibo provide you with generic Player Mooks.