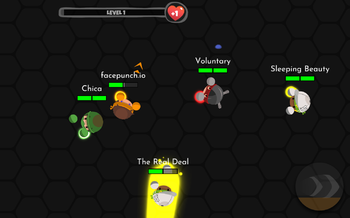 is a Multiplayer Web Game, developed by Clown Games in 2017. In it, players control various characters that are engaged in a cartoony brawl that has unlimited number of participants, yet retains boxing's restrictions on fighting with hands alone and even wearing gloves.

Thus, each character will punch with first their left, then their right, and can occasionally deploy ultimates. They'll also level up through gaining points from either knocking out others, or collecting multi-coloured candy strewn around the arena.

Also see MiniGiants.io for a similar concept from a different creator.