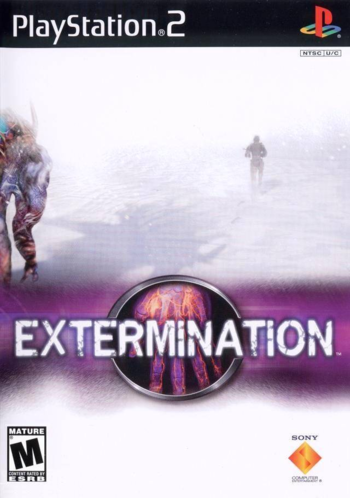 Extermination is a Survival Horror game developed by Sony Computer Entertainment/Deep Space for the PlayStation 2 and released in 2001. Several members of the development team, including Hidetaka "Swery" Suehiro, went on to develop Spy Fiction at Access Games.

The game focuses on U.S. Marines Special Forces Recon Sgt. Dennis Riley, part of "Team Red Light". Riley's squad receives a distress call from Fort Stewart, a top-secret American research facility in Antarctica. The distress call is a request for a prompt airstrike on the base. In response, Team Red Light is sent in via C-17 to investigate the facility.

Tropes that appear in Extermination: