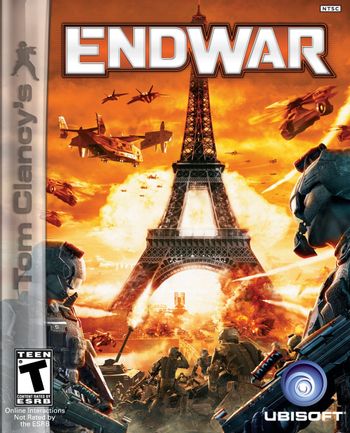 Tom Clancy's EndWar is a real-time tactics game in the Tom Clancy franchise that attempts to capture the notion of modern warfare through aversion or subversion of the tropes we usually associate with real time strategy.

The story of the game centers around the obvious: World War III. Set 20 Minutes into the Future, major nuclear terrorism in the Middle East in 2016 causes gas prices to skyrocket, with Russia soon after becoming the world's leading supplier in petroleum. In 2017, the orbital anti-ICBM shield jointly deployed by the European Union and the United States goes online, supposedly ending the threat of worldwide nuclear war. At the same time, Russia's export of crude oil and energy causes them to experience a significant economic boom period, allowing them to become an international military and economic superpower again. In response to this, Western Europe forges a new charter for the Union, becoming the European Federation - with the notable exception of the United Kingdom, who, with Ireland, forms their own union known as the "New Commonwealth". Despite declaring neutrality, the New Commonwealth does allow European forces to man the missile defense uplink sites on its territory. The prologue to the game begins in 2020, with the US about to complete the Freedom Star orbital military platform, which will shift the balance of power - which upsets the EF, who leaves NATO.

For lack of a better word, everything goes wrong from here. "Terrorists" attack the three superpowers. The US attacks the EF, believing they're funding the terrorists, because Russia planted the evidence. Before those two can compare notes and come to a conclusion, Russia manages to slip in (again, in the guise of the terrorists) and hijack the missile shield with a virus, and the Freedom Star lifter is mistaken for an ICBM by the missile shield and is blown up. Hey presto, World War III.

The player takes on the role of a battalion commander for an elite force on one of three sides of the conflict:

Mechanically, the game mixes in a few RPG Elements - your battalion is persistent between missions, gaining in experience and ability. An incapacitated unit will be evacuated, but the enemy can still kill it before that happens. Tactical Rock–Paper–Scissors is generally in full effect - Riflemen beat Engineers, Engineers beat vehicles (with exceptions for good strategy), vehicles (usually) beat Riflemen. In the vehicles quadrant, they have their own rock paper scissors scheme - Tanks beat Transports, Transports beat Choppers, and Choppers beat Tanks. Outside of the triangle, there are Command Vehicles (purely tactical use, but with a drone escort that beats helicopters) and Artillery (beats everything at long range except Choppers, dies in close combat). However, when factoring in unit experience and upgrades and numbers, it can get a bit more blurred.

The game also prides itself on a Voice Command system that allows players to command units with their voice using a simple structure. "Unit 1 Attack Hostile 1", for instance, would give your first unit the command to attack the enemy designated as Hostile 1. This system exists in the fluff as the "Overlord" battlefield command system, with the player character intended to be a CO using cutting edge technology to gain an unprecedented, real-time, complete view of the battlefield instead of having the magical birds-eye viewpoint common to RTS games. The camera system reflects this and allows the player to view the battlefield only from the point of view of a highlighted unit as if through a gun-camera they carry (Or through the SitRep if you have a Command Vehicle, but that view of the battlefield leaves out many, many details, along with unit feedback), causing no small amount of "they changed the genre, now it sucks" from some RTS fans. In reverse, fans of the game consider this to have no actual loss of function, especially when physical input and voice commands are used in combination to issue orders as fast as possible.

Also has a spinoff for the DS and PSP, a turn-based game with more than a passing resemblance to Advance Wars or Battle Isle. Its unique twists on the formula are a two-part turn cycle, unit placement providing boni to engagements and a rather limited supply of extra units (capturing a depot will only allow you to build one or two top-shelf units and some light vehicles and infantry, assuming it even contains supplies). The setting is roughly the same, though it doesn't reveal any of the backstory and the split between the US and Europe comes much later.

A sequel was said to be in development, but was put on hold, and then ultimately cancelled on February 8, 2010 due to the game's commercial failure.

was announced. Set After the End, it takes place about a decade after the the original EndWar, which ended in a stalemate and left the world in tatters. However, even the end of the world has not brought an end to war. Remnants of the superpowers' once-mighty armies lie scattered, forced to scavenge from the dead in order to survive. Their vast territories are ravaged and occupied by separatists, deserters and bandits. If a sufficiently capable leader could reunite their forces and retake and rebuild their lands, then they might have enough strength to not just survive, but finally win the EndWar...

Gameplay-wise, it's split between the HQ, where the player manages their resources and army, and the tactical battles, which are based around lanes between a pair of bases. Units can only be deployed on these lanes, which they will progress on until they encounter an enemy unit or reach the enemy base, causing them to stop moving and start shooting. Armies are based around Commanders, each leading a group of units of one type with the same basic capabilities as others of the same type, but possessing their own set of special abilities. Each Commander levels up independently of one another, either unlocking new abilities or upgrading existing ones. They can also be fitted with Equipment, which will affect their units' performance in battle.