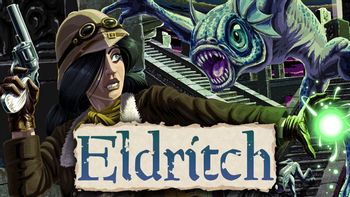 Eldritch is a 2013 indie video game developed by Minor Key Games for Windows, Mac and Linux. Its gameplay is a combination of First-Person Shooter and Roguelike (with some Platform Game and Stealth-Based Game elements), using Minecraft-like graphics.

It is set in the Cthulhu Mythos universe and requires the player character, an amnesiac librarian, to explore randomly generated levels in strange worlds in order to retrieve three souls, which are needed to open a library door leading to the final level. The world is separated into several parts:

A free update was released on December 19th, 2013, which adds The Mountains of Madness as a new world, complete with new enemies, traps, and weapons. You can find it on Steam here

There is also a Halloween-themed update, and a Timed Mission Bonus Level called the Asylum.

Unrelated to the same-name webcomic.