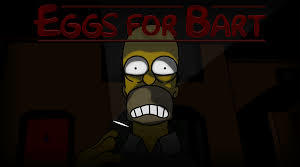 "ONLY EGGS CAN SUSTAIN ME!"
Advertisement:

Heavily based on a Grumpcade joke (which also guest starred members of the Oney Plays group), Eggs For Bart is a Simpsons-themed freeware horror game for PC in three chapters. The first chapter was completed on July 29, 2018, and you play as Homer Simpson, who has been tasked with collecting 24 eggs hidden in the house for his son Bart.

However, there's a problem. Marge and Lisa also want eggs, and they will kill you for them, as "only eggs can sustain them" according to the game's itch.io and GameJolt pages. You can only carry half a dozen eggs each night, so you need to make four trips into the house, with each trip harder than the previous one. Meanwhile, each trip ends with a cutscene detailing a story involving a mysterious murder plot.

The second chapter followed later in the year, and now had Ned Flanders as the player character. The final chapter was completed in May 2019, and had Chief Wiggum in the lead role.