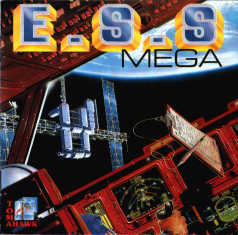 E.S.S. Mega is a simulation game developed by Coktel Vision and released in 1991.

E.S.S. Mega (European Space Simulator Mega) is a space shuttle simulation that strikes a balance between realism and playability. There is a lot of eye-catching 3D-modelled graphics. There’s a wealth of information in the in-game space database, and quite a lot of gameplay depth. E.S.S. Mega is one long campaign that emphasizes on micro-level decisions (e.g. how much fuel to carry) then macro-level space program policies. You will first equip the space shuttle with cargo, crew, and energy. Then you will launch, pilot, and land it on a “shuttle carrier”. When your shuttle is safely orbiting Earth, you will send up and maintain satellites, build and manage a space station.