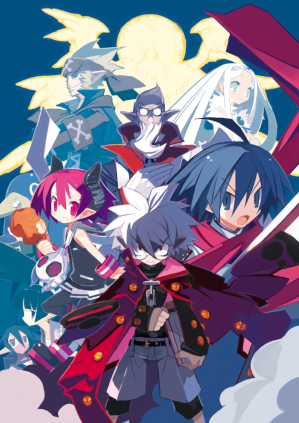 The Netherworld, a world spoiled by spite, cruelty, blood soaked taboos, and boundless riffraff.
They say that dark dwellers run rampant, causing horrifying disasters in these lands.
In the center of this Netherworld lies a school that endlessly continues to expand its grounds.
—The Nether Institute, Evil Academy.
With the Overlord as dean and greater demons for teachers, demon students that follow their baser instincts are labeled as honor students at this school of torment.
This is the root of evil in this tumultuous Netherworld...the Pandora's Box that spreads corruption and destruction.
Still, many continue to be fascinated by this darkness. If you have the courage to descend upon the lands of this Netherworld, beware of losing your mind to the chaos.
This is your only warning...
—Opening Narration

Disgaea 3: Absence of Justice is the third game in the Turn-Based Strategy series Disgaea by Nippon Ichi. It was released in 2008 for the PlayStation 3.

The game involves the students of the Nether Institute, Evil Academy, an entire Netherworld devoted to "teaching" demons how to be evil. Honor students are those who beat up other students for milk money and cheat during exams, while delinquents attend class and perform good deeds in the community.

Mao is the Evil Genius son of Evil Academy's Overlord, and is considered the school's No.1 Honor Student because he hasn't attended a single day of class. Looking to take out his father, Mao researches a method using manga and video games as reference material and comes to the conclusion that since The Good Guys Always Win, all he needs to do is become a Designated Hero (by mugging a "Hero" title off of some sap) and then victory will be assured.

Unfortunately, his plan fails, and Mao discovers to his horror that getting rid of the "Hero" title is going to be a lot harder than it was to acquire.

Joining Mao is Almaz, a timid fanboy whose homemade "Hero" title was stolen by Mao; Raspberyl, Mao's childhood friend and rival whose goal is to become the worst delinquent in the history of Evil Academy; Princess Sapphire, the sweet but Ax-Crazy noble that Almaz has a crush on; and Mr. Champloo, the Hot-Blooded Home Economics teacher.

The game features a lot of Downloadable Content which allow you to recruit characters from previous games or other Nippon Ichi games.

Got an Updated Re-release called Makai Senki Disgaea 3 Return/Disgaea 3: Absence of Detention on the Playstation Vita.