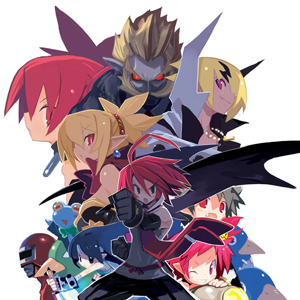 The Netherworld...
A lawless world filled with vicious monsters.
The number of Netherworlds has expanded with the rise of demons powerful enough to rule such worlds... the Overlords.
Now, another world is about to fall prey to such darkness.
—Opening Monologue

Disgaea 2: Cursed Memories is the second game in the Turn-Based Strategy series Disgaea, and was released in 2006 for the PlayStation 2. It was later ported to the PlayStation Portable as Disgaea 2: Dark Hero Days. It came to the PC via Steam in January 2017.

The game stars Adell, the only person unaffected by a devious curse that has transformed all of the human inhabitants of his home village into heartless demons. The source of the curse is Overlord Zenon, an enigmatic figure who became known as the God of All Overlords after he slew one hundred Overlords in a single battle. Adell's solution to the problem is simple: get his mother to magically summon Overlord Zenon to the village and then pound him into submission.

Unfortunately the summoning ritual ends up conjuring Rozalin, Zenon's haughty and entitled daughter. Having accidentally kidnapped the only daughter of the most powerful Overlord in existence, it's a race for Adell to return Rozalin to Zenon before he tears the world apart looking for her. It's a shame that Rozalin is so sheltered that she has no idea where her father actually lives. Meanwhile, Etna has decided to strike out on her own and is gunning for the title of God of All Overlords that Zenon possesses.

Joining Adell are his two younger siblings, Taro and Hanako; Tink, Rozalin's childhood friend who has been transformed into a frog; and Yukimaru, a Ninja girl who seeks revenge against Overlord Zenon for wiping out her clan, zam.