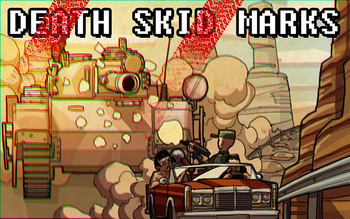 Death Skid Marks is a rogue-like car combat game available on Steam. You play as Mark Skid, a sociopathic metal-head who is desperately trying to get to the Concert to end all concerts. In order to get there, he'll have to fight crazed ministers, rednecks, obsessed fans, and white supremacists, as well as a variety of different bosses. Will you die? Probably. Will it be awesome? HELL YEAH.